Bitkom: Germany’s smartest cities: Hamburg wins just ahead of Munich, Dresden on the podium for the first time, chasers catch up
 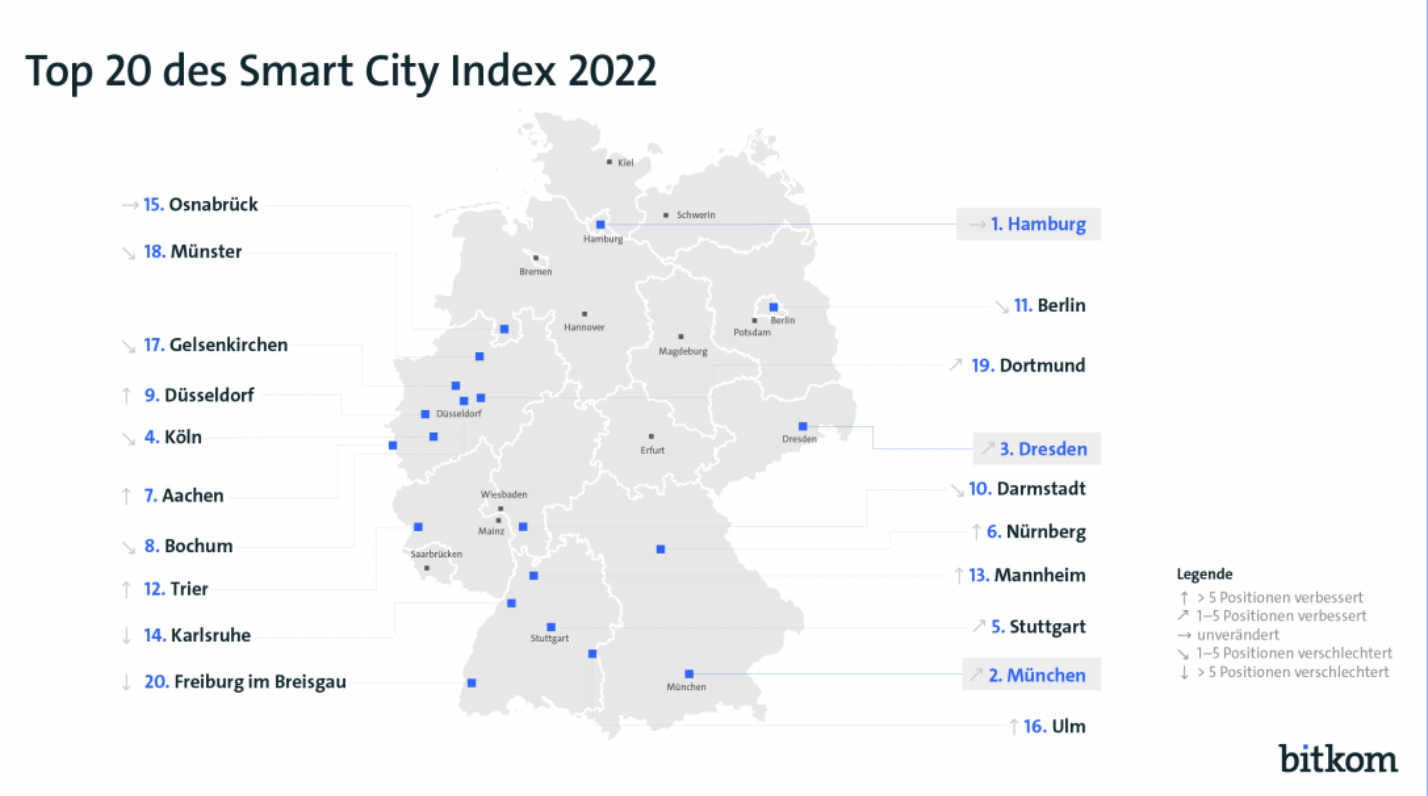 Hamburg wins again, but loses a lot of ground, Munich is catching up at a fast pace, Dresden makes it onto the podium for the first time and overall almost all the stragglers are able to make up ground: These are the results of the Smart City Index, which the digital association Bitkom 2022 surveyed for the fourth time. Hamburg defended its title with 86.1 out of a possible 100 points, immediately behind is Munich in second place for the first time with 85.3 points, and Dresden completes the podium with a slight gap and 81.6 points. Both runners-up have moved up two and three places respectively. On the other hand, Cologne (4th, 79.4 points), which was second last year, and Karlsruhe (14th, 73.5 points), which was third in 2021, have dropped off the podium. The top 10 have moved close together. There are only 4.1 points between 4th and 10th place. Newcomers to the top ten are Nuremberg (6th, 77.6 points), Aachen (7th, 77.3 points) and Düsseldorf (9th, 76.6 points). These three cities each moved up ten places. The top 10 is completed by Stuttgart (5th, 78.1 points), Bochum (8th, 77.0 points) and Darmstadt (10th, 75.3 points).

“The Smart City Index shows the progress made in the digitalisation of major German cities. No city has fallen behind in digitalisation compared to the previous year, the level has risen everywhere – but there are some clear differences in the pace. Because there is also a great deal of dynamism in this year’s ranking. Hamburg was able to defend its title for the fourth time in a row, but the lead is closer than ever. Behind it, everything is moving closer together and even the stragglers can make up ground,” says Bitkom President Achim Berg. “The top has become wider. While Hamburg won four out of five categories last year, we have a different winning city in every category in 2022. There is an enormous digital drive in the cities.”

The Smart City Index testifies to a high level of dynamism in the digitalisation of cities. There are numerous changes of position in the field. A good ranking is no guarantee for a good performance in the coming year, says Berg. Successful digitisation requires commitment, communication and a functioning network of politics, business and society on the ground. “Success factors for a smart city are a committed city hall, a digital strategy, clear structures, a strong local network and the commitment of the population. This is especially true in view of the current challenges of pandemic consequences and energy price increases, to which digital technologies can make a central contribution,” says Berg. “Regardless of size and financial strength, it is crucial that politics and administration get down to business. It needs the will and the ability to trigger enthusiasm for digitalisation throughout the city.”

The Smart City Index also reveals the strengths of individual cities that do not occupy a top position in the overall ranking. In administration, for example, Heilbronn (53rd overall) and Heidelberg (28th) are among the leaders, while Bonn (21st) and Duisburg (41st) are also strong in this area. The top place as Germany’s major city with the most digital administration is achieved by Nuremberg, which is ranked sixth overall. Nuremberg is the only major city to rank first in two of the five categories. Nuremberg also achieved the highest score in the area of mobility. Also strong here are Berlin (3rd, 11th overall), Hanover (7th, 24th overall) and Osnabrück (10th, 15th overall). Paderborn performs best in energy and environment, ranking 26th overall. Ulm (2nd, 16th overall), Trier (3rd, 12th overall), Münster (6th, 18th overall), Oldenburg (8th, 31st overall), Solingen (9th, 35th overall) and Wolfsburg (10th, 42nd overall) also make it into the top 10 in this category. In IT and communications, Gelsenkirchen, ranked 17th overall, is top. In this field, Kiel (5th, 27th overall), Regensburg (6th, 34th overall) and Lübeck (9th, 25th overall) can also secure a top ranking. In the society category, Hamburg, the overall leader, did best. Also doing well in this area are Wuppertal (4th, 23rd overall), Potsdam (5th, 43rd overall) and Leipzig (6th, 22nd overall).

The results of the Smart City Index differ depending on the region. Cities in Saxony Baden-Württemberg and Bavaria perform significantly better on average than the average. Rhineland-Palatinate and Hesse are also above average, while the results in North Rhine-Westphalia and Lower Saxony are below average. However, the number of cities included in the ranking also differs significantly between the states – Saxony, for example, has only three major cities at all, while North Rhine-Westphalia has 30. No statement can be made for states with fewer than three major cities. Regardless of the region, university cities perform better on average. Berg: “The exchange between science and practice is an advantage in these cities. Cities also benefit from young start-ups and should also actively give them the opportunity to test smart city applications on site in collaborations.”

Oldenburg and Hannover make up the most ground

The biggest climber in the overall ranking is Oldenburg (67.2 points), which has moved up 25 positions from the back to the front of the midfield to 31st place. Hanover (70.3/24th) made up 21 places. The relegated teams of the year are Rostock (45.8 points/71st place/-28 places), Jena (50.4/59/-25) and Bielefeld (58.1/46th /-19). Berg: “The strong shifts are also explained by the fact that no city has remained idle and the level has risen on average. So it’s possible to push digital projects and still lose a few places because others have done even more.” At the bottom of the overall rankings in 79th to 81st place are Salzgitter (33.6 points), Bremerhaven (32.2) and Erfurt (31.9). For the first time, Bergisch-Gladbach (47.9 points), which has finished second to last three times in a row, is not among the last-place finishers and this year has climbed 14 ranks to 66th place.

A total of nearly 11,000 data points were collected, reviewed and qualified for the Smart City Index. All 81 cities with a population of 100,000 or more were analysed and evaluated in the five subject areas of administration, IT and communication, energy and environment, mobility and society. The five areas are divided into 36 indicators, which in turn consist of a total of 133 parameters – from online citizen services to sharing offers and environmental sensors to broadband availability. The municipalities were actively involved in the data collection. Cities were able to self-report their level of performance and were required to provide sources to support this, which 85 per cent of cities did. The data was then validated by a team of experts from Bitkom Research. For all other cities, missing data was researched, and the cities then had the opportunity to verify the data. The Smart City Index is supported by Detecon, Visa, PwC and Uber.