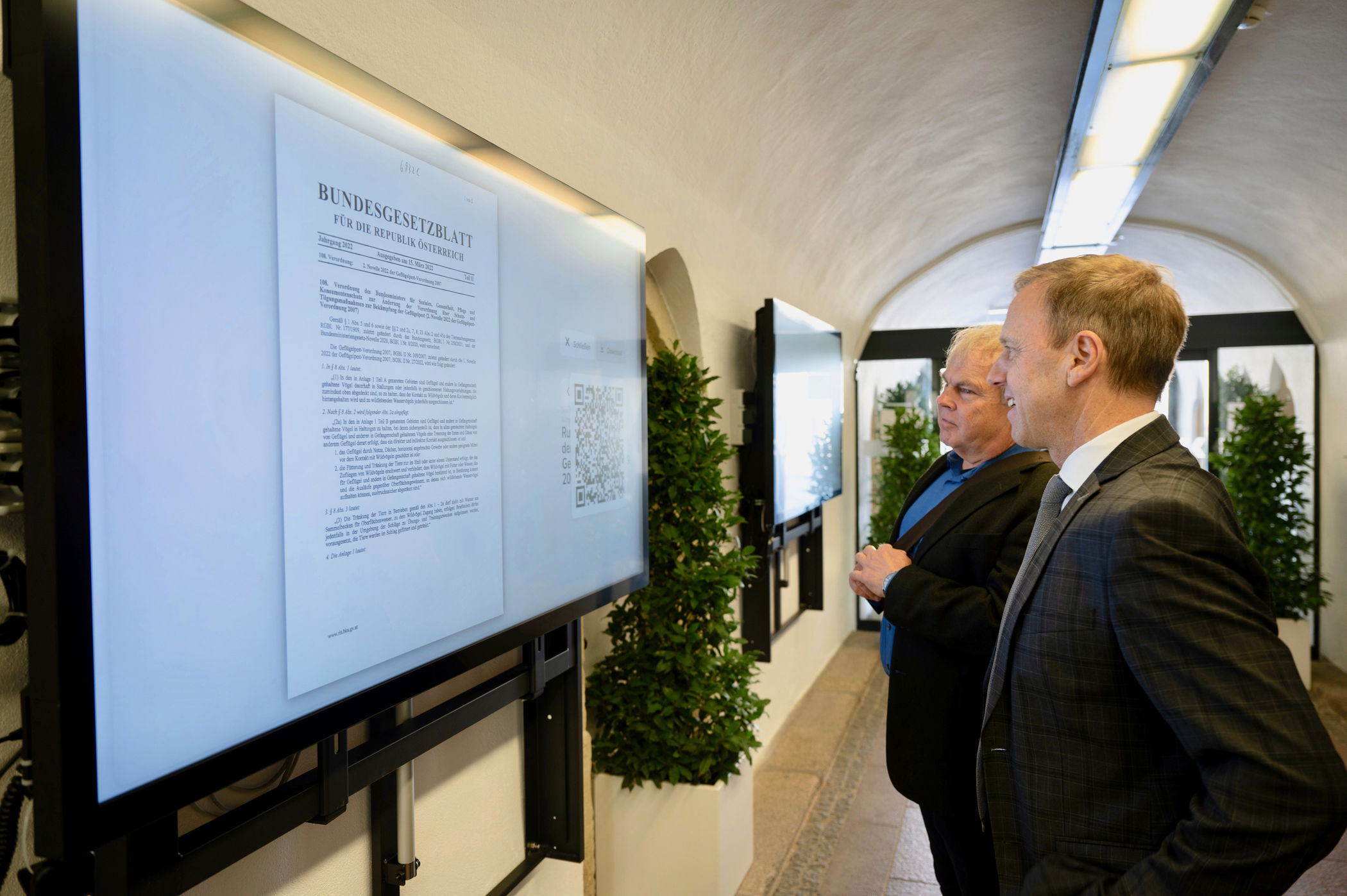 The Viennese display specialist Schaukasten.at has realised a pilot project for a digital official notice board for the Lower Austrian provincial capital of St. Pölten. In the future, about 500 announcements, notices and other documents can be posted and viewed on the town hall screen in due time throughout the year, explains Martin Koutny from the city’s citizen service.

Offices and authorities are increasingly faced with the challenge of accommodating their many notices in the few existing display cases. In addition, the official documents are becoming more and more extensive and have to be exchanged manually with every change, which causes time and effort. With the digital notice board, this process can be simplified and automated, a notice can be shortened to five seconds, explains Koutny, after which everything runs automatically including deadlines and archiving.

The project manager for the digital notice board in St. Pölten is Raphael Diendorfer, head of Schaukasten.at. He enthuses about the many benefits, also because the administrative workload is significantly reduced. “In the future, all processes will be automated, so that the responsible employees no longer have to constantly check for deadlines or remove expired notices by hand,” Diendorfer explains. “And when the notice board is not in use, it can also be used for regional marketing, event and club announcements.”

Screens instead of paperwork
The new office board in the entrance area of the town hall consists of two modern, 65-inch screens with touchscreen function. The screens not only provide announcements and headlines, but also the entire content of the announced documents, which have not only increased in number in recent years, but have also become more and more voluminous due to the increasingly complex legal situation, which had actually only exacerbated the problem of space for paper.

The conversion to the digital office board improves the service for citizens through its clear, easier-to-read and always adaptable presentation. “Mayor Matthias Stadler is certain that “digitalisation will bring the administration closer to its citizens and increase its efficiency and transparency. The desired document can be opened by tapping on it, turned over with arrow keys and downloaded to a mobile phone via QR code.

Access from home
But that’s not all: the solution developed can be expanded as desired and thus other locations in St. Pölten can also be digitised. In addition, the content of the digital notice board is mirrored on the website of the provincial capital, so that it can also be accessed from home. https://www.st-poelten.at/ 700 hours of programming work have been invested by Schaukasten.at so far to develop a customised programme. All the desired functionalities are to be implemented by the beginning of 2023. 40 employees in the town hall have been trained to use it. They are responsible for uploading and activating the documents on the Digital Office Board.

Verification and time stamp
Schaukasten.at managing director Raphael Diendorfer explains the details of the programming: “In the future, the announcement process will be completely automated, up to and including archiving. The system creates automatic protocols of notices for the obligation to provide proof as well as digital time stamps. This electronic signature on the notices is unalterable and forgery-proof, which ensures the greatest possible legal certainty. The system can thus also be adopted by other cities, Diendorfer clarifies.