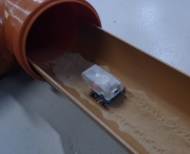 “Joey” is a new robot from the University of Leeds (https://www.leeds.ac.uk) for checking pipelines. It weighs just 70 grams, according to project leader Netta Cohen, making it small enough to pass through pipes as small as 7.5 centimetres in diameter. According to the developers, it moves completely independently, so unlike inspection cameras used today, it is not dependent on external control.

Robust in an unreal environment

“Underground water and sewage networks are among the least hospitable environments, not only for humans but also for robots. This is already a big challenge,” says developer Thanh Luan Nguyen. In addition, he says, Joey’s are tiny, so they have to function with very simple motors, sensors and computers that take up little space and consume little power.

Joey moves on 3D-printed legs that consist of three spokes and can overcome small obstacles. It is equipped with a series of energy-efficient sensors that measure the distance to walls, intersections and corners, navigation tools, a microphone and a camera and headlights to film faults in the pipe network and store the images. The prototype cost only 300 British pounds (about 342 euros) to produce.

45 seconds for one metre of pipe

The team demonstrated that Joey could find its way through an experimental network of pipes, including a T-junction, turns to the left and right, an obstacle and straight sections, without instructions from human operators. On average, Joey managed to check one metre of pipe network in 45 seconds.

For the developers, sensors are important that allow Joey to navigate without having to switch on the camera or use energy-hungry computer vision. This saves energy and extends Joey’s radius of action. When the battery is almost empty, Joey returns to his starting point to recharge it.