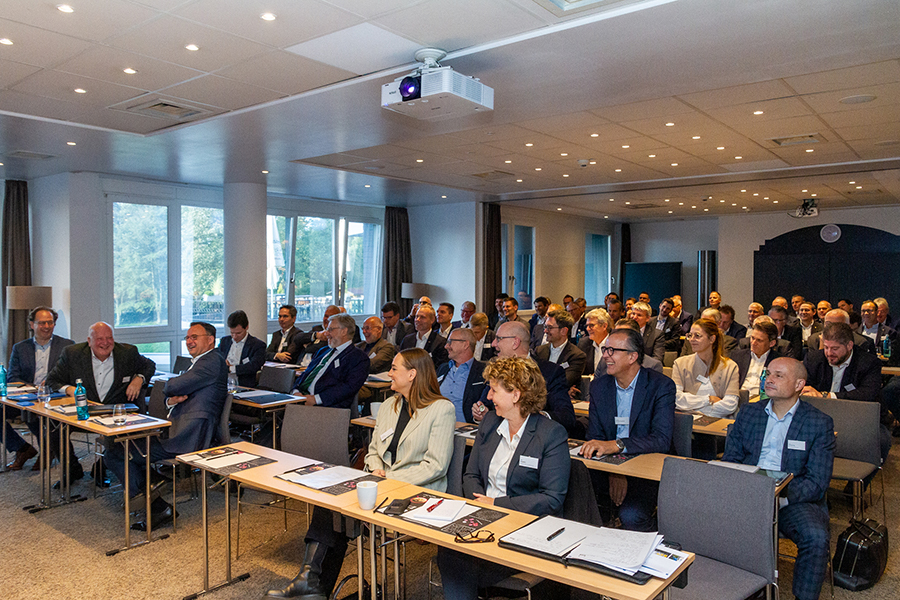 On 9 November 2022, around 70 representatives of the lock and hardware industry and the building hardware trade met for the 61st Standing Conference in Velbert. In the conference rooms of the Best Western Parkhotel Velbert, Martin Meesenburg, spokesman of the ZHH working group on building hardware, and FVSB Chairman Karl Kristian Woelm welcomed the participants to this industry get-together, which was held in accordance with strict antitrust compliance rules. As is customary, this year’s conference was again organised by the Fachverband Schloss- und Beschlagindustrie (FVSB).

Karl Kristian Woelm was very pleased that the meeting could be held without Corona restrictions in the key region, a cluster with tradition and perspective. Looking back, it could be stated that the industry came through the pandemic quite robustly and that the past year can definitely be called a boom phase. However, the total number of incoming orders is declining again, and the product ranges and regions paint a mixed picture. Many participants are directly affected by the Ukraine war, but indirectly the general conditions have deteriorated for all. Entrepreneurs need planning security and hope for concrete measures from the government, especially regarding the energy problem. Restrictions on construction activity due to rising interest rates or requirements from the circular economy will occupy the industry even more in the future. The FVSB chairman saw no reason to be too pessimistic about everything, but added: “It’s getting harder to be optimistic!”

Martin Meesenburg was also enthusiastic about the large number of participants, which underlines the general need for maintaining contacts. The Standing Conference provided the ideal setting for this, but at the same time he hoped that the AKB industry meeting could also take place again on the occasion of the next Fensterbau. Economically, the trade is very satisfied with the course of the year so far, but downward tendencies are already visible. The hobby sailor warned of an approaching storm with a wide variety of dangers, such as rain, storms, fog or even icebergs. “It is not possible to continue partying on all decks, but it is time to review the course and take appropriate measures,” Meesenburg said. For example, it needs to be analysed whether the decline in volume that is already being registered really only reflects a lower demand, or whether distribution channels in the building hardware sector are also changing.

Dorentina Kodralija has been Managing Director of the AKB in the Central Association of the Hardware Trade (ZHH) since September and took part in the Standing Conference for the first time. She drew a positive picture of the mood in the building hardware trade, especially in the window sector. Due to price increases, further sales increases are expected for the next year, while volume sales are likely to decline. Opportunities are seen in the renovation market and the still well-filled order books of customers. But the challenges for the future were also named. Cost increases in many business areas will be confronted with a stagnating or even declining market. The central task will remain the reduction of the shortage of skilled workers. Kodralija took this opportunity to appeal to the entrepreneurs present to support the trade in its further training of employees, for example through speakers or company tours.

Holger Koch, deputy managing director of the FVSB, pointed out that economic forecasts are being revised ever more rapidly. The overall economic business expectations are currently falling faster than the assessments of the situation. The construction industry is also becoming increasingly pessimistic. Declining building permits, rapidly rising house prices and skyrocketing mortgage rates are causing a slump in the granting of new property loans. Monthly production of building hardware is visibly moving away from its highs in the spring. This can only be partially explained by possible destocking in the trade, craft and manufacturing sectors. The window and exterior door studies recently updated by Heinze predict a decline in market volume of around one percent each for 2023. Accordingly, the growth in the renovation sector cannot fully compensate for the weakening new construction.

Even if there should be even stronger impulses for renovation due to rising energy prices and the political will for climate neutrality, the dealers and manufacturers present expected greater declines than forecast. In a spontaneous survey, the clear majority of participants assumed a decline in volume of between five and ten percent in the window and exterior door market.

FVSB Managing Director Stephan Schmidt reported on the publication of the draft of the new EU Construction Products Regulation (CPR) and the possible effects on CE marking.