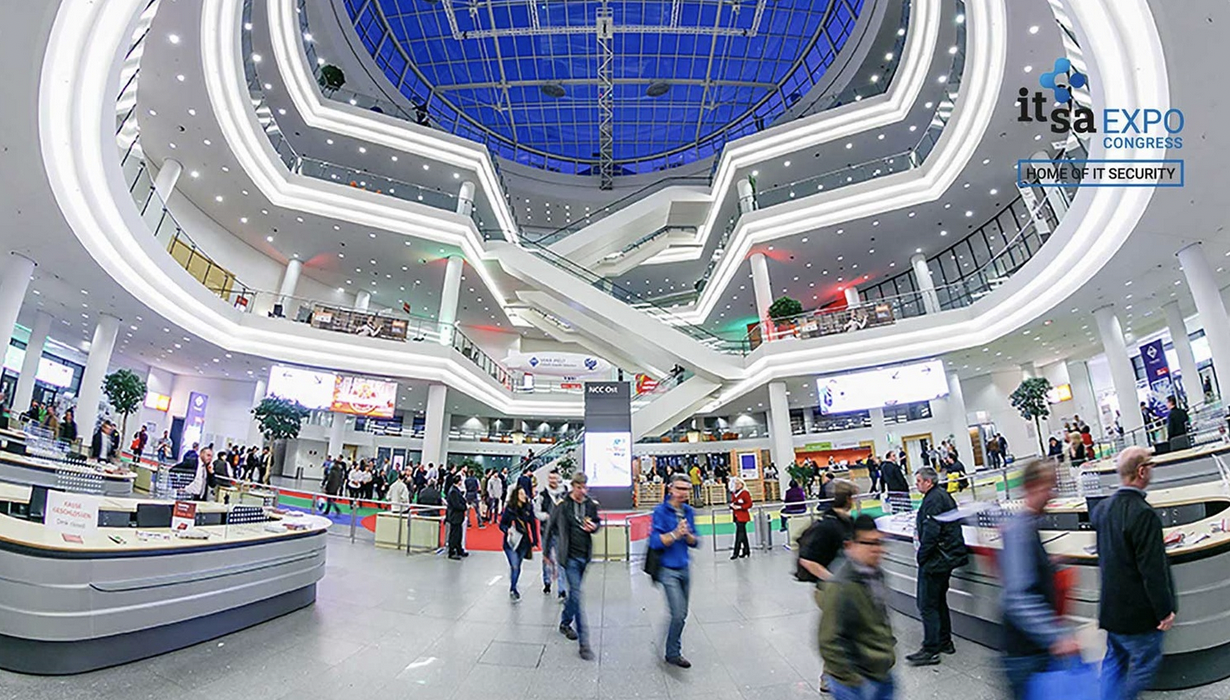 From 25 to 27 October, international cyber security experts will exchange views at it-sa Expo&Congress. Around 700 exhibitors from 29 countries will come to Nuremberg for the event. This means that it-sa 2022 will set a record in terms of internationality. The exhibitors also occupy more exhibition space than ever before. At Europe’s most important trade fair, visitors can attend around 350 forum lectures on topics such as the shortage of specialists, the protection of critical infrastructures and technical solutions. The congress programme Congress@it-sa accompanies the trade fair.

It is one of the most pressing issues of our time, the topicality of which can hardly be overstated: The calls for greater IT security are becoming ever louder, particularly with regard to critical infrastructure. From 25 to 27 October, international cyber security experts will come together in Nuremberg for the it-sa Expo&Congress, Europe’s leading IT security trade fair. 693* exhibitors from 29 countries will be represented at the it-sa 2022. This is a record number of international exhibitors. The exhibitors will occupy more exhibition space than ever before in Halls 6, 7 and 7A. To mark the opening of the trade fair, an official reception was held the day before the trade fair began, on 24 October, at the Bavarian State Ministry of Finance and Homeland.

“Protecting data and IT infrastructures is the shared mission of IT security officers at all levels. The it-sa in Nuremberg has provided the framework for discussing IT security issues since 2009 – and it has never been as relevant as it is this year”, said Frank Venjakob, Executive Director it-sa, NürnbergMesse. The international pavilions from Austria, the Czech Republic, and South Korea underscore the importance of international solidarity in matters of IT security. The tremendous innovation potential of young IT security firms in particular is demonstrated by the special exhibition area Startups@it-sa and the ATHENE Startup Award UP22@it-sa, which will be awarded for the fifth time in a row at the trade fair. The initiative known as “Germany’s Best Hackers” and the presentation series “Women in Cybersecurity” highlight approaches for attracting young talent to the IT security field, while the roughly 350 forum presentations showcase the wide range of expertise in this field. The “it-sa insights”, product-neutral presentations and panel discussions, and the special keynote address of Avast CISO Jaya Baloo on the challenge of quantum cryptography deserve special mention. The trade fair is accompanied by the Congress@it-sa, featuring yet again the Annual Congress of IT Security Officers of German States and Municipalities as the key point of contact for public administration officials. The wide range of information on offer is rounded out by hybrid elements and the trade fair and the presentation of selected trade fair highlights on the online dialogue platform it-sa 365.

“The industry response was outstanding: All available space this year was already booked in September”, said exhibition director Frank Venjakob. The exhibiting companies travelled to this year’s it-sa Expo&Congress from 29 countries. Compared to the previously biggest it-sa edition in 2019, the number of trade fair participants from foreign countries increased further, as did the amount of space occupied by international exhibitors. Especially noteworthy were the two international pavilions: one shared by Austrian and Czech firms and South Korea’s first-ever pavilion. Moreover, the total exhibition space clearly shows that the it-sa continued to grow after last year’s interruption: The roughly 700 exhibitors in Halls 6, 7 and 7A occupied more space than ever before. Accompanying events like the Bitkom Executive Dinner, the German-Austrian IT Security Breakfast hosted by TeleTrusT, and the official reception at the Bavarian State Ministry of Finance and Homeland the day before the trade fair began underscore the importance of the it-sa Expo&Congress as a platform for in-person dialogue.

Big stage for start-ups at the it-sa

Start-ups whose innovative power is evidenced by their IT security solutions will be showcased at the special area Startups@it-sa in Hall 7, featuring 16 innovative start-ups, and in the award ceremony for the ATHENE Startup Award UP22@it-sa. Among other start-ups, Quantum Optics Jena and TrustCerts, both pitch candidates for the UP22@itsa Award, will present their products at the it-sa. Quantum Optics Jena presented new methods for key generation and transmission based on quantum physics and TrustCerts will present a blockchain-based solution for protecting digital verifications. The TrustCerts team has good reason to celebrate: As the pitch winners, they will receive the ATHENE Startup Award UP22@it-sa in the International Forum at 1:00 p.m. of 27 October. A panel discussion of the role of start-ups, the development of new technologies, and their future potential will provide the framework for the award ceremony.

With discussions of topics such as the current threat scenario, new products and solutions, and management-oriented information on trends in IT security, the five open forums comprising around 350 programme items cover all aspects of IT security. Panel discussions and presentations on overarching topics are featured in the product-neutral “it-sa insights”. The presentations in the International Forum in Hall 7 will be given exclusively in the English language. And they will be live-streamed on the digital dialogue platform it-sa 365.

Jaya Baloo, the Chief Information Security Officer at Avast, will give the special keynote address at the it-sa 2022. Besides conducting research in quantum cryptography, she serves as the Vice Chairperson of the Strategic Advisory Board of the EU Initiative Quantum Flagship. Great progress is being made in post-quantum cryptography, Baloo says. As she sees it, the industry is confronted with tremendous challenges, which she will illumine in her presentation “Our Secure Quantum Future”. The special keynote address will be given in the International Forum at 12:00 p.m. of 27 October.

Challenge of skilled worker shortage in IT security

IT security professionals are among the workers most in demand these days: Experts with relevant knowledge are rare. The it-sa is supporting the search for new talent with the Initiative “Germany’s Best Hackers”. The winners of the Ethical Hacking Challenge will be honoured in Forum A at 5:00 p.m. of 25 October. The female perspective will be highlighted in the series “Women in Cybersecurity”, which began already before the trade fair with online formats. On each day of the trade fair, female IT security experts will discuss topics such as career opportunities and hurdles, career entry opportunities, and personal experiences. The panels will be composed of prominent figures such as Avast CISO Jaya Baloo and (per video link) Despina Spanou, Head of Cabinet for the European Commission Vice President.

The purpose of the accompanying congress programme Congress@it-sa, which already began the day before the it-sa, is to additionally convey specific expertise. The congress presentations of the event partners are tailored to the individual information needs of their target groups, including topics such as IT Security in SMEs (TISiM – Tranferstelle für IT-Sicherheit im Mittelstand), the Importance of the Data Act for AI Applications, and Contractual Agreements on IT sEcurity (both davit [the information technology section of the German Association of Lawyers]). Again this year, the Annual Congress of IT Security Officers of the German States and Municipalities, which is geared to IT security officials in public administration, will be held as part of the congress programme.

Since October 2020, the dialogue platform it-sa 365 has enriched the information offering of the it-sa Expo&Congress with a full-year digital programme under the motto “Solutions, Networking, Knowledge”. In addition to regular interactive dialogue formats, the dialogue platform also provides information about exhibitors and other providers. And it provides practical tools to help with trade fair preparation, matchmaking, and on-site meeting arrangements. During the trade fair, a dedicated hybrid channel “it-sa@Home” will share impressions of the trade fair on the Internet. Finally, a selection of presentations from the forum programmes will be made available on the platform after the trade fair.

Information about the it-sa Expo&Congress on the it-sa 365 dialogue platform: www.itsa365.de

* The visitor, exhibitor, and space numbers for this trade fair are calculated and certified in accordance with the uniform definitions of the certification institute FKM– Gesellschaft zur freiwilligen Kontrolle von Messe- und Ausstellungszahlen.