Tech Compass 2023: for most people, technology is crucial in the fight against climate change
 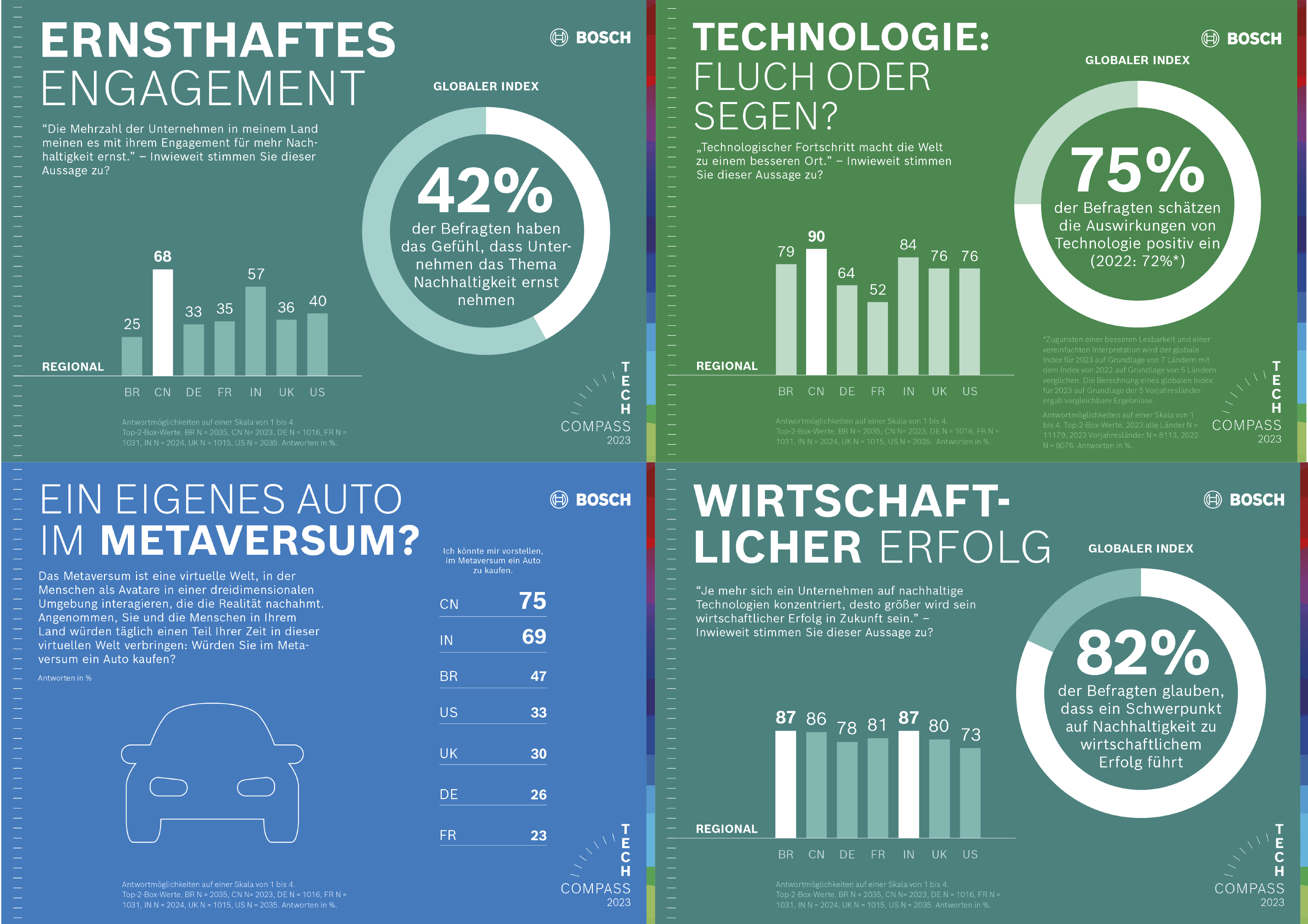 Energy crisis and climate change: the burning question on everyone’s lips is how humanity can meet its demand for sustainable and affordable energy. This is evidenced by the Bosch Tech Compass 2023, a representative survey conducted in seven countries worldwide. The survey will be presented at CES in Las Vegas (January 5 to 8, 2023).
Sustainable technologies and economic success Respondents largely agree on the economic potential of sustainable solutions and products: a full 82 percent believe that the more a company commits to sustainable technologies, the more economically successful it will be in the future. This view is most prevalent in Brazil and India (each 87 percent); by comparison, it is least prevalent in the United States (73 percent). When it comes to the business community’s commitment to climate action, the survey suggests that there is still room for improvement: more than half of those polled (58 percent) feel that only a minority of businesses are seriously committed to sustainability at present. “Combating climate change is the biggest task of our age. People are therefore right to expect companies to provide technical solutions to these issues. Bosch is tackling this challenge and is firmly committed to promising technologies such as hydrogen electrolysis,” says Dr. Stefan Hartung, chairman of the Bosch board of management.

Combating climate change with different technologies
Many parts of the world are shifting to renewable energy, but people across the globe are still reluctant to completely abandon nuclear power and fossil fuels such as gas and oil for power generation. A total of 62 percent of respondents are in favor of promoting solar power, while 44 percent want to see efforts to promote wind-power technologies. However, these opinions differ by country. In China (36 percent) and France (31 percent), support for promoting nuclear power technology is still comparatively strong (23 percent globally). People in the United States (oil: 21 percent, gas: 24 percent) and India (oil: 22 percent, gas: 23 percent) remain significantly more committed to oil and gas technologies than those in other countries (global figures: oil: 14 percent, gas: 15 percent). In Germany, by contrast, there is little desire for nuclear power (13 percent) and fossil fuels (oil: 4 percent, gas: 8 percent) – many Germans reject fossil energy and favor the expansion of solar and wind power (solar: 63 percent, wind: 50 percent) as well as hydrogen (51 percent).

Trust in technology is growing
The Tech Compass shows that, in a world beset by uncertainties, trust in technology has grown since the previous year. Worldwide, 75 percent of the people polled now believe that technological progress can make the world a better place (2022: 72 percent). What’s more, 83 percent of respondents believe that technology holds the key to combating climate change (2022: 76 percent). “Digitalization can play a special role in sustainability,” Hartung says. “We are investing in the development and expansion of promising new technologies, with a focus on sustainability, mobility, and Industry 4.0.”

Mobility in the metaverse
Apart from sustainability, the Tech Compass also provides interesting insights into other issues – such as the metaverse. In this virtual world, where people interact as avatars in a three-dimensional space modeled on reality, mobility will also play a role: 43 percent of respondents can imagine buying a car for the metaverse. Interest and willingness to do so are especially high in China (75 percent) and India (69 percent). And although respondents in Brazil (47 percent), the U.S. (33 percent), the U.K. (30 percent), Germany (26 percent), and France (23 percent) are still somewhat more skeptical, the numbers show that the desire for a car exists not only in the real world, but in virtual reality as well.

About the survey: For the survey, people aged 18 and over in seven countries (Brazil, China, Germany, France, India, the U.K., and the U.S.) were polled online on behalf of Robert Bosch GmbH by the market researchers Gesellschaft für Innovative Marktforschung mbH (GIM) in September 2022. In Germany, France, and the United Kingdom, 1,000 people were polled per country; in Brazil, China, India, and the U.S., it was 2,000 people each. The random samples are representative of their respective countries in terms of region, gender, and age (Brazil, Germany, France, U.K., U.S.: 18 to 69 years / China, India: 18 to 59 years).