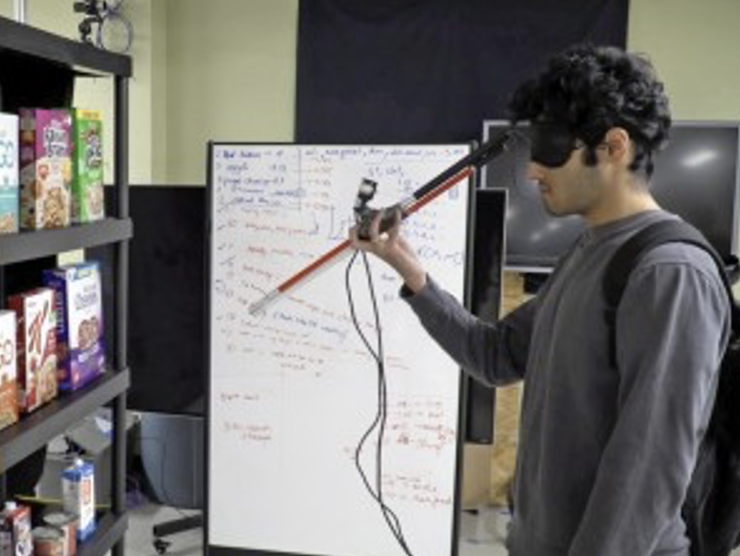 An intelligent walking stick developed by researchers at the University of Colorado Boulder (https://www.colorado.edu) is designed to make life easier for blind and visually impaired people. It is equipped with a camera and software that can evaluate images. In addition, the user can tell his cane what he wants. The developers initially trained the cane to perform two functions. It can find a free seat in a restaurant and a desired product in the grocery shop.

Navigation by voice and vibration

With its camera and AI-based integrated computer vision technology, the walking stick maps and catalogues the world around it. When it is told to “find a free seat”, it scans its surroundings until it finds what it is looking for. Then it directs its owner to his destination by means of voice instructions and vibrations in the cane’s handle. He says “Go straight ahead”, then a little later “A little to the left” and finally: “You have reached your destination”.

It proceeds in exactly the same way when its owner is looking for a certain muesli in the supermarket. However, the user must know his way around a bit and know in which department he can get the desired product. Once he has reached it, he switches his stick to search mode. This has stored pictures of the products – this happens in some training runs – which are often needed. When he arrives at the muesli shelf, the image processing system evaluates what is on offer and guides the visually impaired person precisely to the muesli of his choice.

Many tests with blindfolded eyes

“Artificial intelligence and computer vision are constantly improving and people are using them in driverless cars, for example. But these technologies also have the potential to improve the quality of life for many people,” says researcher Shivendra Agrawal. To test their stick, the experts set up a café and a grocery shop one after the other in a room at the university. Then volunteers who had been blindfolded used the cane to achieve the respective goals. They succeeded in ten out of twelve tests. Now Agrawal and her PhD supervisor Bradley Hayes want to test the cane with visually impaired people.

Bitkom on the Bundestag debate on the skilled labour strategy, Berlin, 20 January 2023

The Bundestag is debating the Federal Government's skilled labour strategy. Bitkom President Achim Berg explains: "The shortage of skilled workers is jeopardising the digital future viability of our country. Across all sectors, there is already a shortage of 137,000...