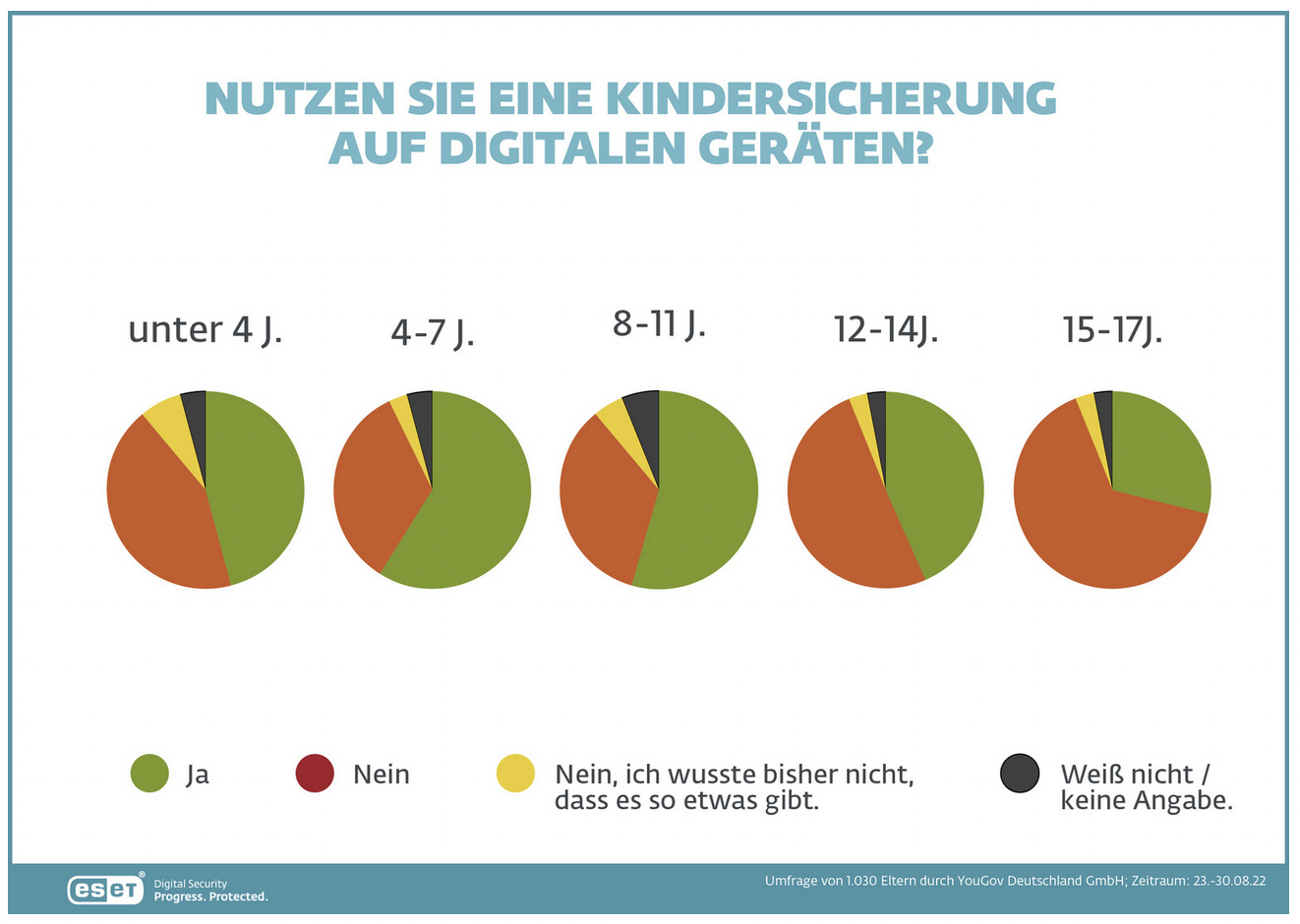 Swimming with a water noodle or riding a bicycle with training wheels: When the youngest learn new things, parents prefer to play it safe. But when it comes to the internet, they apparently have complete trust in their offspring. In the current ESET study, both the under-fours and the four-to-seven-year-olds score better than teachers and educators when it comes to internet and media skills. This is possibly also a reason why almost half of the respondents do without child protection programmes: Even one in two of the under-fours goes online without protection. It is also interesting that most pocket money goes into sweets instead of digital entertainment. These are among the results of the second part of a current representative YouGov study commissioned by the IT security manufacturer ESET, for which more than 1,000 parents with children up to 18 years of age were surveyed.

Half of the protégés surf without child-friendly filters

Trust is good, control is better: In contrast to learning how to ride a bike or swim, parents do not use (technical) aids when it comes to Internet safety. Almost half of the respondents do without a child protection programme, most often mothers and fathers in Hamburg, Saxony-Anhalt (59 % each) and Mecklenburg-Western Pomerania (57 %). It is particularly alarming, however, that almost every second child under the age of four and a third of four to eleven-year-olds are also out and about in the digital world without protection. Not surprisingly, however: The older the children are, the more often they refrain from using age-appropriate filters.

“The results of the entire ESET study show that young people are young and connected. Almost every child can access a digital device and the internet, which has made the Corona pandemic even worse,” says Ildikó Bruhns, project manager Safer Kids Online. “In addition to schools and kindergartens, parents are also called upon to prepare their children for the digital world. The fitter the adults themselves are in terms of media competence and technical know-how, the more they can support their offspring in child-friendly media use.”

The fact that only 45 percent of parents use parental controls for the internet is possibly due to the fact that they trust their children much more than teachers when it comes to media competence. This includes not only being able to handle digital devices, but also to use them sensibly and responsibly. The older the children, the higher the confidence in their abilities. But a total of 60 per cent of those surveyed attest to excellent to good knowledge of the internet and media even among those under four and four to seven years old. Among eight to eleven-year-olds, the figure is as high as 75 percent. Only one in five of the respondents gave average to poor knowledge, most frequently among the four to seven year olds (32 %).

Teachers and educators fare much worse in comparison with parents when it comes to media and internet skills: only half receive the rating excellent to good. The people of Baden-Württemberg (71 %) have the greatest confidence in media education. More than one-third of the parents attest that the teachers still have some catching up to do, especially with teenagers. The most critical voices here come from Saxony-Anhalt (40 %).

Parents have even more confidence in their own skills than in those of the teachers and their children: 83 % of those surveyed rate their own media and internet skills as excellent to good. Berliners (92 %) and Thuringians (88 %) in particular give themselves the best rating. Only one in seven sees a need to catch up in this area. The difference between the parents is striking: Almost 20 percent of the fathers rate their level of knowledge as excellent, compared to only eight of the mothers. Men are also ahead when it comes to the rating of very good: a third of the respondents rate themselves as very good, but only a quarter of the women. The latter most frequently rate their media competence as good (44 %) or average (17 %).

Sweets rather than digital entertainment

Those who believe that young people spend all their pocket money on digital media have missed the point: sweets are clearly in the lead with a quarter. Especially among eight to eleven-year-olds (38 %) and 12 to 14-year-olds (37 %), chocolate & co. are very popular. About one fifth invest their pocket money in toys, jewellery, clothes and cosmetics or get food for the road. For one in six, the cash flows into comics, books or magazines. Only one in ten spends their savings on in-app purchases, for example, gaming apps, with 14 per cent the most common being 12 to 17 year-olds. Especially in the eastern part of the country, about every sixth child purchases additional services or content in apps. And only one in seven buys prepaid cards, such as for Google Play, with their pocket money.

The entire ESET study “Kids on the Net” and further information can be found at: https://www.eset.com/de/about/presse/pressemitteilungen/pressemitteilungen/eset-studie-eltern-trauen-kindern-deutlich-hoehere-medienkompetenz-als-lehrenden-zu/

The data used is based on a representative online survey conducted by YouGov on behalf of ESET Germany. Across Germany, 1030 parents participated in August/September 2022. The results were weighted and are representative of families with children under 18.