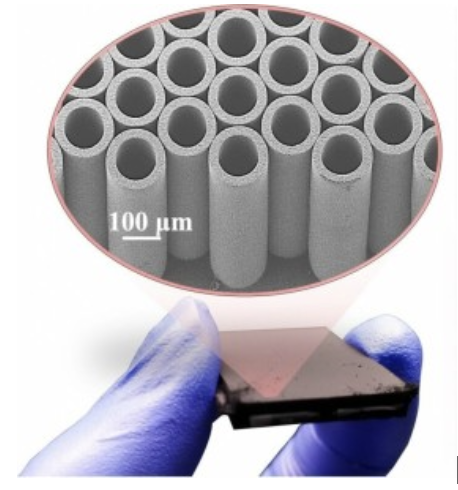 Nanotubes and absorber made from them (Illustration: Ramathasan Thevamaran, wisc.edu)
A foam based on carbon nanotubes improves the protective effect of helmets, such as those worn by two-wheelers and soldiers, by a factor of 18. The material, developed by researchers at the University of Wisconsin-Madison (https://www.wisc.edu), absorbs 18 times more energy in the event of an impact than previous shock-absorbing material used in US military helmets. Accordingly, the consequences of severe shocks, for example in the event of an accidental impact with the road, are less severe.

Withstanding hard impacts better
“It holds enormous potential for absorbing energy and thus mitigating the effects of hard impacts, which in turn should significantly reduce the likelihood of brain injury,” says research leader Ramathasan Thevamaran. The experts have been experimenting with carbon nanotubes, which are cylindrical tiny structures whose walls are made of carbon atoms. These are arranged hexagonally, forming hexagons, and are only one atomic layer thick.
Carbon nanotubes have extraordinary mechanical properties. To improve their performance, the experts arranged these tiny structures in such a way that maximum shock-absorbing effect could be expected. Finding the optimal design parameters for the new foam proved difficult. These include the diameter of the cylinders and their distance from each other. Systematic experiments in which each parameter was varied and all possible combinations were made brought success.

Result of 180 experiments
“In total, we looked at 60 different combinations and did three tests with each sample, so 180 experiments went into this study,” Thevamaran points out. The clear winners were cylinders with a thickness of ten micrometres or less, arranged close together. This resulted in a foam with the best shock-absorbing properties.
Due to its carbon building blocks, the new material retains the shock-absorbing effect at both very high and very low temperatures. According to the experts, this makes the material ideal for extreme environments. Team Wendy (https://www.teamwendy.com), a manufacturer of helmets for the military in Cleveland in the US state of Ohio, has already acquired the licence for the new material.