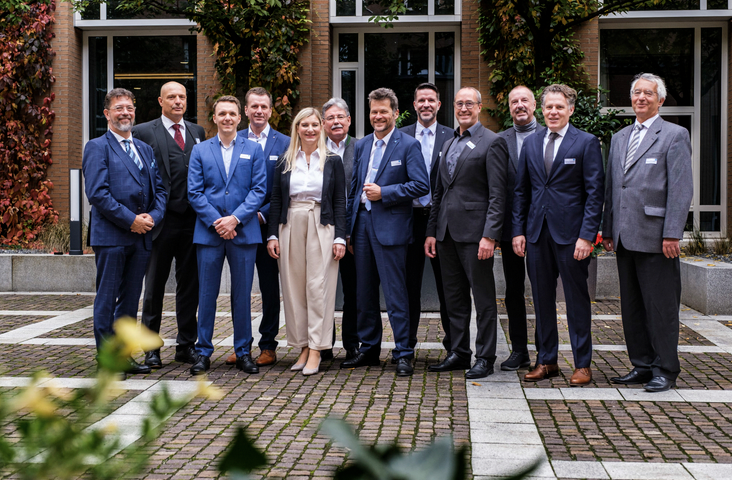 After a year’s break due to the pandemic, the 44th BVSW General Meeting was held again in Presence on 12 October 2022. Johannes Strümpfel was confirmed as the new Chairman of the Board and Stefan Rolf was elected to the Board. Waldemar Kindler, who is leaving the Advisory Board, was honoured by celebrity guest Dr Günther Beckstein, former Minister of State in the Bavarian Ministry of the Interior and Bavarian Prime Minister.

Johannes Strümpfel had already taken over the office of Chairman of the Board in March 2022 from Alexander Borgschulze, who had handed over the post due to another career move. At the general meeting, Johannes Strümpfel was confirmed in his position as Chairman of the Board. Markus Klaedtke, Diehl Stiftung & Co. KG, will be the first deputy chairman, Holger Baierlein, Audi AG, the second deputy.

Until now Johannes Strümpfel BVSW Board Member of Division A, representing industry. As his successor for this post, the members elected Stefan Rolf of Rohde & Schwarz GmbH & Co. KG. The other board members Ernst Steuger of NWS GmbH, Tobias Schmid of Schmid Alarm GmbH and Boris Bärmichl, TechnologieScout, remain in office.

“The difficult times are leading to the increased inclusion of corporate security in strategic corporate decisions,” said Johannes Strümpfel in his welcoming speech. “From our point of view, this is a positive effect, but at the same time it entails the increased need for information and knowledge. The BVSW has set itself the goal of supporting and strengthening its members accordingly here.”

“Already in 2021, we have moved a lot so that BVSW members can master the current and upcoming challenges,” said BVSW Managing Director Caroline Eder at the presentation of the 2021 annual report. For example, it had succeeded in taking up many of the current topics in seminars and further training and offering the training programme predominantly digitally.

In addition, the association had organised the digital lecture series “Security Policy Days 2021”, which was very well received. Cooperation with authorities and politics was also intensified: The Bavarian Police, the BVSW and the TH Deggendorf signed a cooperation agreement on 16 July 2021 on police support for the Bachelor’s degree programme “Security Management”. In addition, the association with its office in Munich hosted the “Digital Roadshow Economic Protection 2021” of the Federal Ministry of the Interior, for Construction and Home Affairs.

At the general meeting, Waldemar Kindler was also honoured for his many years of service on the BVSW advisory board. The former Minister of State in the Bavarian Ministry of the Interior and Bavarian Prime Minister, Dr Günther Beckstein, presented him with the BVSW Medal of Honour for his services to the association. Waldemar Kindler, former state police chief, had been on the advisory board of the BVSW since 2013 and actively supported the work of the association for many years.