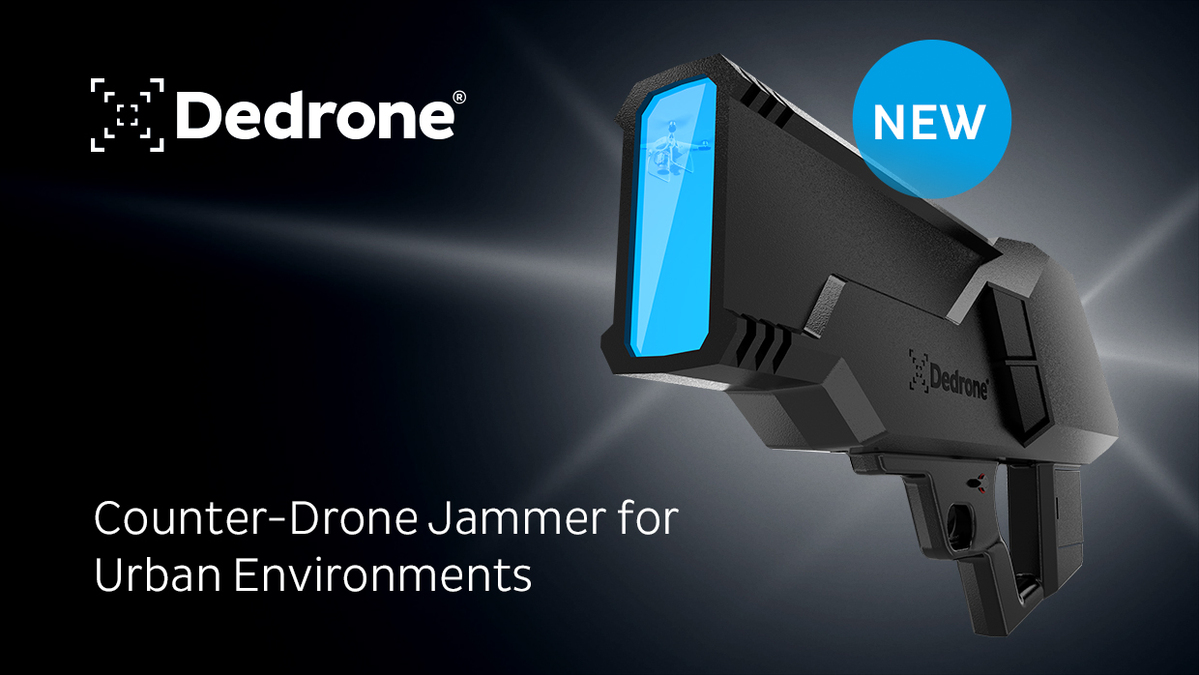 Dedrone, the market leader in airspace security, has presented the next generation of its portable jammer. The DedroneDefender sets new standards in drone defence with its precise jamming of radio frequencies and completes Dedrone’s complete solution for a secure airspace. With its very handy design and high usability, the DedroneDefender is the optimal drone defence solution for law enforcement in urban areas.

Weighing less than 3.5 kilograms and measuring 56 centimetres in length, the DedroneDefender is one of the smallest and lightest jammers on the market. The system is equipped with a narrowband jamming function that reduces the risk of interfering with other systems in the vicinity and complies with military standard MIL-STD-810H. The DedroneDefender is specifically configured for the communication protocols of the more than 250 different drones registered in the DedroneTracker database. As soon as a drone’s communication is interrupted, it enters a pre-programmed safety mode to minimise the risk to others and damage to the drone.

DroneDefender and DedroneDefender can be integrated into Dedrone’s complete solution, but also into third-party command-and-control solutions. Dedrone’s C2 solution DedroneTracker detects, identifies, analyses and locates unauthorised drones even several kilometres away and against obscure backgrounds.

“The DroneDefender is an effective solution for extremely critical environments, as confirmed by our federal and military customers,” says Aaditya Devarakonda, CEO of Dedrone. “DedroneDefender now provides this security to law enforcement agencies and is an important component of our layered defence approach. The system is easy to implement and, especially when combined with DedroneTracker’s threat rating, can be used to defend against drones. Our database is continuously updated to ensure that both DroneDefender and DedroneDefender are able to disarm the latest drones, as well as home-made ones.”

Dedrone offers mobile drone detection solutions for every application. This summer, the company launched DedronePortable, which is already being used by militaries around the world thanks to its easy-to-transport and quick-to-set-up drone detection system. Dedrone protects businesses and organisations in over 37 countries, including four of the G7 nations, nine US federal agencies including the Department of Defense, more than 75 critical infrastructure sites, over 20 international airports and 50 correctional facilities worldwide. The company provides drone detection for some of the most high-profile events around the world and works closely with over 35 law enforcement agencies.